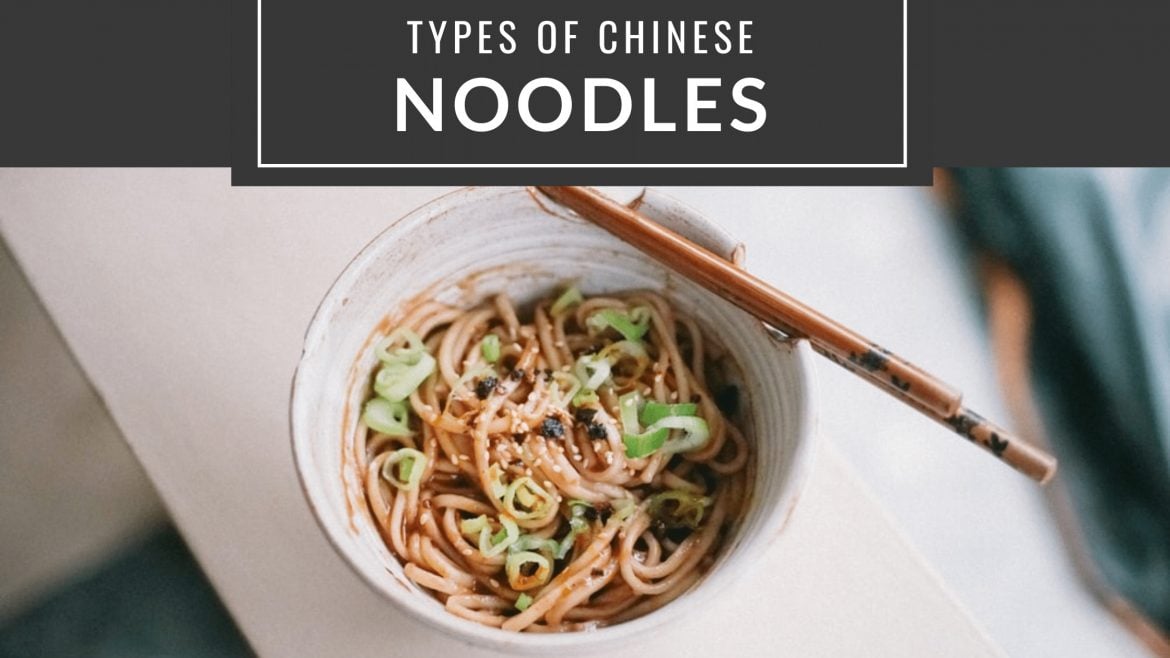 I can easily pinpoint where the noodles originated from.It used to be the staple food for people in China during the Han Dynasty. But I am not giving you a history lesson here, rather I am writing a long (just like a strand of noodle) piece on how they got creative and made the many types of Chinese noodles that seem to satisfy our Chinese cuisine cravings now.

Sometimes, it is not just about the flavour of the sauces that goes into making the perfect dish for the perfect mood, it is the mouth feel and the chewing consistency that really gives us the satisfaction. Thus, with different types of Chinese noodles, you’ll experience a whole different dish, even if it is in the same sauce.

There are many ways to tell you about the types, but for your better understanding, I will split them based on the ingredient that is used to make them. I hope by the end of it you’re craving a mean bowl of kung pao mein.

Most commonly, the star ingredients in different types include egg, rice, wheat and starch.

This is probably the most widely known form of Chinese noodles globally. These are majorly egg, slightly wheat noodles that can be bought fresh, frozen or fried. For a typical chow mein dish, people use the par boiled version to bring out the taste and the fullness of the favours.

They are easy to cook and tend not to stick to the wok. This is one of the most versatile forms of Chinese noodles that can be eaten any way you desire. Throw some in with a wonton soup or make it spicy, street style!

People often get confused between lo mein and yao mein, but there are a few distinguishing factors. One being that lo mein is more stout and hefty. While chow mein is typically soaked before cooking to soften them, lo mein are just thrown into a pan to be boiled.

In a nice stir fry style dish, add these noodles during the last two minutes of the entire cooking to prevent them from becoming over cooked. Bonus tip: lo mein acts as a great and valid substitute for Italian spaghetti. So you have a sense of comparison now.

No, yi mein did not come from Yemen. It is traditionally a Cantonese dish that can be clearly distinguished from their yellow colour that they get from the yolk. They are chewy and soft, courtesy of the soda water that goes into the dough of the noodles. It is then fried and dried into a noodle cake that can be mistaken for any supermarket grade noodles.

Fun fact about yi mein:  In China there are actually referred to as sau mein or longevity noodles and are considered as traditional food for birthdays. These long noodles are eaten so people who eat them can have a long life!

I’m not sure they belong here because they were discovered in Japan. The matter of consideration would be that it was actually a Chinese person, living in the Chinatown part of Japan. For that reason alone I thought I could add it to the list of types of Chinese noodles.

Perhaps after chow mein, ramen seems to take the world by the storm. They are thinner than chow mein and lo mein and are treated with an alkaline ingredient, kansui, that helps add the curly shape to the dish. Tastes best when it is served in a broth brewed with soy, miso, salt and loads of veggies and meat.

Their typical description would involve describing them as slim, thin and very round noodles, usually of 18 cm in length. But because of their fragile nature, they are usually broken into much smaller pieces upon cooking them.

These vermicelli are the perfect addition to stir fried dishes, fresh spring rolls, soups and other dishes, as the bits act as the intermingling and binding agents and just brings the whole thing together!

Before we get into it, let me tell you one word: gluttony. Yes, this nian gao can be pretty glutinous, but that’s what makes it so yum, no? Some people don’t consider this a noodle because of what it looks like. Steamed dough: check. Cut into strings: no.

While it is most commonly used in desserts and other sweet dishes, there is this one Shanghainese variation where the nian gao is cut into noodle-like strings and tossed in with crunchy veggies and hot sauces.

Imagine flat noodles, now imagine them flatter and wider. That’s ho fun for you. Imagine how fun it would be to slurp to this while it’s pursed with your lips, all the flavour clinging to it like its life. Of course, you could always slice them into as thin as you’d prefer.

Since they are so nice and wide, the possibility of them sticking together and causing a major cooking fiasco is high. But a well-oiled wok might just save you.

Simply put, these are rice noodle rolls that are soft like jelly. I had to resist the urge to bring them close to my face and feel how soft it is like you do with plush fur. This texture of the fun is achieved with a little bit of hardwork and gaslight skill in the mixing arts. A perfect mixture of rice flour, glutinous rice flour and tapioca make everything else seem shoddy.

Making dao xiao mian is rather simple. A straightforward dough is made with water and flour, to which oil is added to generate the added elasticity and the chewiness that the noodle has.  Although, for it to pick up on the real stretchiness, the dough is allowed to sit for a while before a chunk of dough is repeatedly sliced while it is in boiling water. Because of its stretchy feeling, it is usually served in broth.

La mian is made in quite an interesting way. Through vigorous twisting, stretching and quick folding of dough till it formstarnds, this soft,melty Chinese noodle is born. There is no particular length or thickness that la mian has, but that’s because it all depends on how many times the la mian chef folds the dough.

Liangpi, literally translated, turns into ‘cold skin noodles’. They’re wiggly and have a cumbersome process of making these noodles. The procedure is called the ‘dough rinsing’ method, where one makes a dough using wheat flour and slowly kneads it with the assistance of cold water. The dough is rinsed in a flat bowl of water until the dough becomes small and the water turns white. This flatbowl is stored overnight so that the clear water floats to the top and the wheat starch heavy water settles down.

The remaining paste is then transferred to smaller plates and steamed and cut into thin strips to turn them into liangpi. Trust me, the labour is totally worth it because after all of this you get some liangpi tossed in chilli oil, garlic, sliced cucumber and black vinegar!

These are often confused with rice vermicelli noodles because of its appearance when it’s uncooked. If you aren’t sure, just check the ingredients of the pack and you are good to go. Fensi, when cooked turns clear and transparent like see-through cellophane. There are two ways to cook fensi. First, you can either boil it for 3-5 minutes and drain it in cold water, or you can soak it in warm water for about 10 minutes.

These are typically made of mung bean starch, but some asp use potato and tapioca starch. They can taste similar to wheat noodles, but are softer and more dense in texture. They absorb a lot of flavour so you can go crazy with the sauces. Don’t hold back!

Here’s a pro tip while making Chinese noodles: They cook very quickly. In fact, in under 5 minutes, you can see them become al dente. Thinner noodles, such as the vermicelli kind, take even less time.

Pro tip #2: The Chinese noodles made from wheat dough usually already have tons of salt in  it, so you don’t need to add any extra in your noodle soups. Keep in mind though that the rice and starched noodles don’t have any salt.

In any case, there are several ways to make noodles. Their taste, mouthfeel and how they perfectly match with the recipe you’re going for depend on how the noodle itself is finally produced. Whether it is rolled out into a flat sheet, folded and then cut into strings; or extruded from a machine press; peeled into long strips under hot water;pulled from along cylindrical dough repeatedly till it forms strings; or finally, kneaded into the desired shape. Choose wisely, my friends.