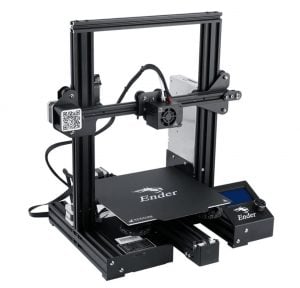 Store Description: One of the best 3D printer stores online. It's a one stop shop destination!

Top China made 3D Printer selection. You can buy from Aliexpress. Sellers there ship worldwide.

3D Printers are underrated. If put to right use, I’m sure a lot can be created at home or the office. Most 3D printing aficionados are capable of printing out some useful products like face shields, masks, toys, sculptures and more.

But they are expensive. And if you want to build a collection of 3D printers pertaining to different use cases, then it’ll probably burn a hole in your pocket.

There are of course alternatives. And today we cover the Best Chinese 3D printers.

If you are looking for 3D printers in China, then you can look out for some of the best chinese 3D printer manufacturers.

One of the most popular 3D printers from CREALITY. It has a host of features that we’ll get to. But first primarily, what can be printed with the Ender 5 Pro?

A lot of complicated prints can be made with the Ender 3 Pro.

Some of it’s best features are

If you are looking for a powerful 3D printer that is also affordable, then the Anycubic Mega S is a solid contender. Why?

First of all, there are units of this piece located in Europe, Australia, North America, South American and Asia. So you can expect quick shipping.

So what can you make with this device?

Some of the features of the Anycubic Mega-S

One of the other top 3D printer brands from China is FLSUN and they have a good collection of Chinese 3D Printers which are pretty amazing.

It has a tall design that can print tall objects with ease.

What can be printed with the FLSUN QQ SS?

Here are some of the features of the FLSUN 3D Printer

The Flyingbear store on Aliexpress has a 99% rating and they are a top brand. That’s a testament to their quality. One of their most popular products is the Ghost 4S.

The Artillery 3D Printer X1 has a 110V option or an even powerful 200V option. It’s a premium 3D printer that promises pristine print quality.

There isn’t much to do in terms of initial setup as it comes pre-installed to about 95%. The maximum print speed is about 150mm/s. It works with USB, TF Card/SD card and USB Stick.

The machine weight is about 14.5kgs. You can print some fine articles with good detailing. It ships from China, Italy, Russia, Czech Republic, Spain and the U.S.

One of the best Chinese printers that’s good for starting out is the EasyThreed Mini 3D printer. It works with a SD card and costs about $80. Let’s check out it’s salient points.

It’s a perfect home printer and a 3D printer for young students. It uses the Easyware software. It’s an automatic printer, all you need to do is insert the SD card.

It’s not meant to print high-end equipment and only small items. The machine is quite light, just weighing around 1.3 kilograms.

Is compatible with Windows OS. It’s perfect for making small figurines and simple toys. The print quality isn’t as detailed as some of the other printers out there.

The Kelant S400s is a beast of a printer. It costs $500 and it has a low of power. The Kelant 3D printer has a 12 month warranty and ships from China, Spain, Italy, U.S., Brazil, Australia and Czech Republic.

You can buy the printer standalone or with Resin and a separate platform and so on. You can actually 3D print a mask with this printer.

It has a 3.5-inch touch screen for the operations. The print speed is 30mm/hour. The power is about 144W. It uses the Chitubox slicing software. With the USB port, you can just plug and play whatever you need printed.

The application is wide-ranged. From home & garden requirements to toys and even dental requirements.

Another Creality takes in the Top Chinese 3D printer list and it’s the mid-ranger, the 10S Pro V2. Costing around $500, it has the perfect budget and perfect value.

Weighs around 13.7 kgs, which is light for what this 3d printer offers. It can be connected through a SD card. There are a few automation options with the 10S Pro V2 and that is a BL-Touch probe and dual-gear extrusion among others.

It’s known for the size of the printing in terms of volume and is strong and can be upgraded with minimal parts. The automatic bed levelling, although is a positive is not that consistent all the time and has an open frame, which a lot of people don’t prefer.

Most 3D printers on Aliexpress have a metal frame, which means they are sturdy and rugged. They also use the latest printing technology. Each 3D printer uses a different software and that’s something you need to check before you make a purchase.

The CREALITY store on Aliexpress also sells 3D printing parts which will come in handy! Overall this is one of the best Chinese 3D printing brands. They have 3D printers under $500 and more.

Anycubic is another super popular 3D printer manufacturer. They have been around for quite some time and make specialised 3D printers depending on certain requirements. They make affordable 3D printers which work great. Here are some of their best 3D printers.

You can check out Anycubic Predator on  Aliexpress amongst the other options.

If you are looking for 3D printers that can print complex objects, then you can look at FLSUN. They are one of the top 3D printing manufacturers in China. They have 3D printers under $300. Here is their best collection

If you are looking Cheap 3D Printers on Aliexpress, then here are the best 3D printer stores that sell the best goods!

Then check out the best 3D printer parts site online.

What is the best Chinese 3d printer under $700?

Check out the Artillery Sidewinder – $600

What is the best Chinese 3d printer under $500?

What is the best Chinese 3d printer under $300?

What is the best Chinese 3d printer under $200?

What is the best Chinese 3D printer under $100?

What is the best Chinese 3d printer for home use?

Here are the basic rules for a simple 3D printer for home use.

If you are looking at making simple objects and toys, then here are a few suggestions.

Best Shipping Method on AliExpress 2021 | Choosing the right one

Cancelled Order on AliExpress: What to do?

Costs & Methods of Shipping from China to USA in 2021

Hi there! I'm Tim! Welcome to my review website. I have been a huge of China and their product offerings. For two reasons - They work well and they are incredibly reasonable. I'm here to cover the best Chinese products in the market to help you save money and time, looking for amazing deals!
Want to know more about me? Find out here
Reach out to me - timothy@bestchinaproducts.com.