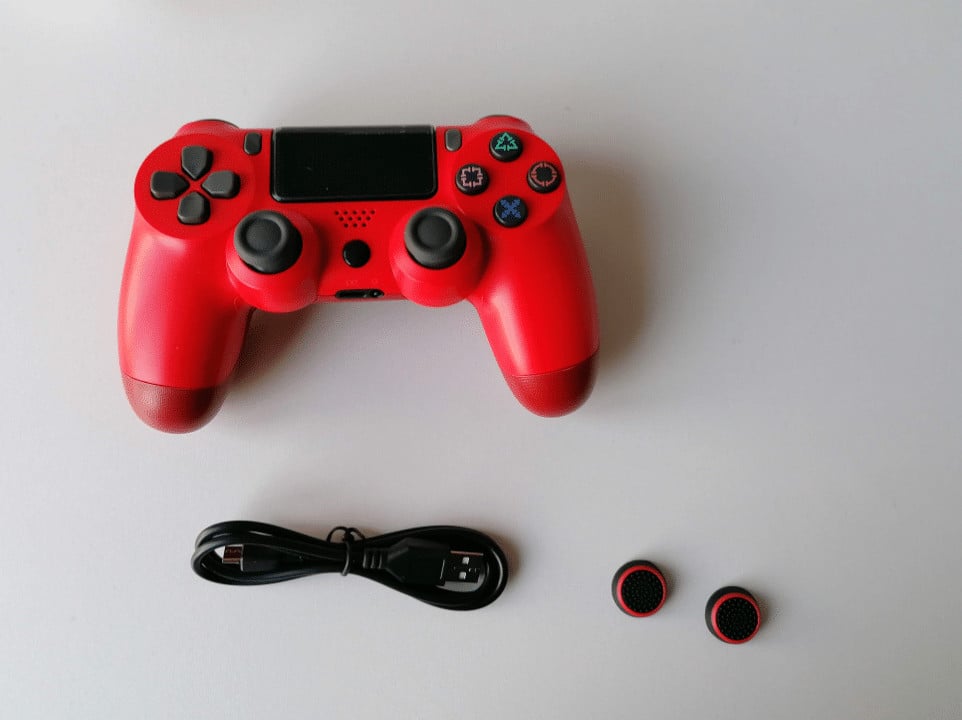 Nobody thinks about a Fake PS4 controller unless the need arises.

If you have been gaming for a while, you realize that your controller isn’t invincible. The buttons break or get stuck, the controller starts cracking or breaking and it ends up malfunctioning.

If you want to get a brand new controller, it’ll set you back around $64 for the DualShock 4. If you compare that to the price of the PS4 itself, it’s literally 20% of the cost.

Sometimes you’ll need dual controllers to play with your buddies and it starts getting expensive. This is the reason why people resort to getting Fake PS4 Controllers.

But this has its downsides too. Some of these fakes heat up, they stop functioning after a while and there is no guarantee or warranty that makes one trust these knock off ps4 controllers.

Today, I’ll be busting these myths, digging deep into all the options we have for fake PS4 controllers and ultimately, letting you know if it’s worth it or not!

The cost of a Fake PS4 controller ranges from $19 to $39. The price depends on how much of a true replica it is and also the design pattern. Aliexpress fake PS4 controllers are the best fake PS4 in the market.

Is a Fake PS4 Controller Worth it?

A Fake PS4 controller is absolutely worth it on most occasions for people who are looking for cheap alternatives to the original ones. Apart from a few minor issues such as heating, it’s fully functional and let’s you game in peace.

Based on my research this is what I found about Fake PS4 Controllers.

So let’s first understand the fake PS4 controller options we have in the market.

The three most popular Fake PS4 options on Aliexpress are

In this review, we’ll be checking to see if each of these Fake PS4 controllers are worth it or not and if they are, then the best pick of the lot.

The FTiEUX gamepad is capable of multi-platform compatibility, connecting with the PS5, PS4, PS4 Slim, PS4 Pro and PC. The seller has a 96.6% positive feedback rate and almost 13K followers. Let’s take a look at the key features of the gaming controller:

Check it out on AliExpress here.

This joypad has connectivity with PS5 consoles enabled, but can only be used to play PS4 games. Here are a few highlights of the gaming controller:

Check it out on AliExpress here.

Firstly the GTIPPOR has about 4700+ orders with a 4.7 rating which is pretty good. It costs about $19, which is almost $50 cheaper than the original.

It comes in numerous colors – Green Camo, White Camo, Golden, Red, Light Blue and more. These are the same exact colours of the Dualshock 4.

The design of the GTIPPOR Fake PS4 Controller is the exact same as the Dualshock 4. It comes in the same colours and also has all the buttons of the original. This was a concern with older fake versions of the PS4 Controller. Some buttons were fake, but not in this case.

While performing the Button check, we realized that this Fake PS4 controller has a ‘Share’ button to share instantly, your gameplay.

Only with PS4. Does not work with PC or other consoles.

There were some concerns with the sensitivity of the buttons and sometimes they need to be pressed harder than the original. But the precision control is pretty exact and there are no complaints there.

This PS4 controller can be charged easily by plugging it into the PS4 Box. It uses a micro-USB port.

Does it work with all games?

The GTIPPOR Fake PS4 controller does work with all types of games – FPS, Car racing and more. There were no issues when we tested these out. Although some users did complain that it didn’t work with certain games. There is a simple way to fix this and that is to plug out the controller and put it back in.

This unit also has features like the touch pad, integrated light bar & built-in speakers. It has a 3.5mm jack for private audio.

The battery for this controller is built-in and requires no external battery.

Not all fake products are perfect. So what are the concerns with this?

The finish in some units is not up to par. Which means the durability of certain products are in question.

The sensitivity is a bit less compared to the original and it requires a hard push.

In some games, the mapping has a bit of issues and this can be fixed with reinstalling the PS4 controller

The next in the list is the Nuhiyo Gamepad Fake PS4 Controller. This is a $21 controller from Aliexpress. It’s the second most popular Fake PS4 controller. It has a rating of 4.4 with 2,357+ orders.

It comes in two versions – Wireless and Wired. Let’s check out it’s features

The wired version does not have the touchpad, speaker, headphone jack & EXT jack. The wireless version has a 660 mAh battery and has all the features mentioned above. It’s clear that the sellers want to push the wireless version.

The design of the Nuhiyo Gamepad Fake PS4 controller is the exact same as the original. It comes in numerous striking colours such as Red, Gold, Light Blue, Orange, Silver and more.

All the buttons on the original are available and none of the buttons are dummy buttons and they all work. Similar to the GTIPPOR controller reviewed above, the buttons perform their function.

This is where this controller has an edge over the controller reviewed above. It’s compatible with a PS4, PS3 and also a PC.

The sensitivity on this controller is perfect and there are no concerns whatsoever in terms of hardness and it responds pretty smoothly. Even the touchpad responds really well.

It has a 600 mAh battery which is your standard micro-USB charger that charges quickly and lasts about a few hours. It’s not as much as the original, but not bad considering it’s a replica. As you can see, the charging cable for the PS4 controller is the same micro-USB which works exceedingly well.

Does it work with all games?

All different types of games were tested with this controller and it works perfectly well without any fuss.

It works well with the PC, but some games require an emulator. There is vibration control which gives you an immersive gaming experience.

The only concern with this controller is the cheap plastic feel and it doesn’t feel as sturdy. But obviously for a much cheaper cost, it’s definitely worth it.

The other fake PS4 Controller that is worth a look is from the SZKoston store. I’m not doing an in-depth analysis on this controller, but will just list out the features

Can you get fake ps4 controllers?

Fake PS4 controllers are available in the market and they are about $50 cheaper than the original. They have the exact same controls and features without anything amiss. A fake PS4 controller also comes with a touchpad, integrated light bar & built-in speakers.

How can you tell a fake ps4 controller?

Generally a fake PS4 controller is much cheaper than the original. In terms of design and functionality, the plastic form factor doesn’t feel sturdy. In some fakes, the buttons are hard to control and the battery life is pretty poor. If you’ve bought the controller from an unauthorized dealer, then it’s highly likely a fake.

Is my Dualshock 4 fake?

Here’s how to identify a fake Dualshock 4

How can you tell if a PS5 controller is real?

Most notably, the PS5 Dual Sense controllers have the PlayStation symbols on their rear pads. A close look at the rear will show countless overlapping squares, triangles, circles and X symbols. Genuine controllers will also have Sony’s branding and technical info printed on the rear. Knock-offs would also have a much lesser build quality than that of the Dual Sense, as the original controllers use superior materials.

Fake PS5 controllers come cheap, at around US$20-25. Primarily, most do not support PS5 games despite being compatible with the PS5. This is because Sony has made the PS5 backwards enabled for playing PS4 games. The features of fake controllers live up to their original aftermarket counterparts but are not long-lasting. However, with such a cheap price tag, it is more than one could expect.

How to spot a fake PS5 controller?

Sony runs a tight ship in terms of aftermarket accessories, controllers in particular. Although they have licensed the likes of Razer, Nacon and Scuf to produce aftermarket controllers, they have drastically different looks compared to the original PlayStation controllers. Since the makers apart from Sony are very limited for aftermarket PS controllers, it is very easy to spot fake PS5 controllers. Furthermore, you can keep an eye out for key identifiers such as the official Sony and PlayStation branding.