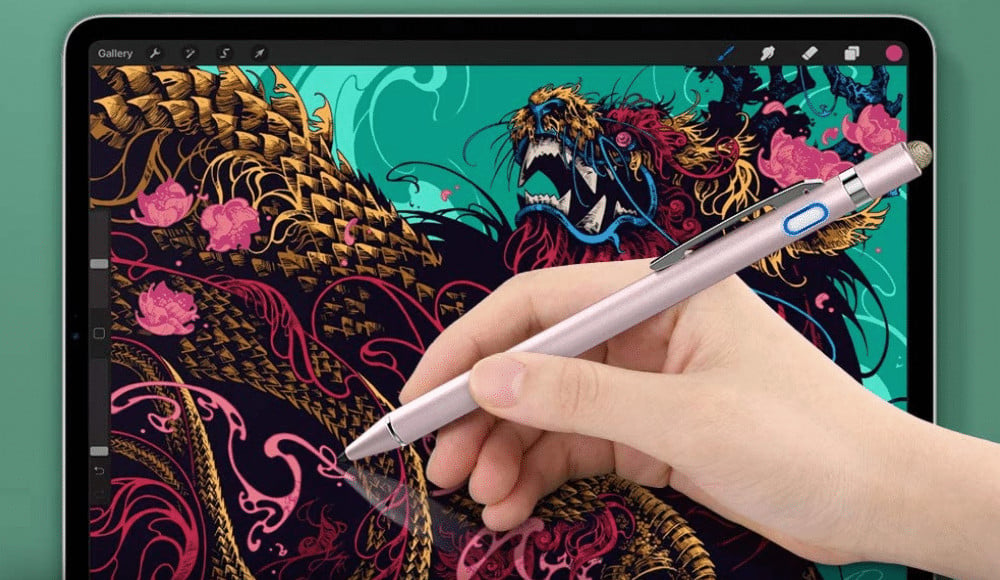 Apple pencil is one device people love to hate, purely because of its price. It’s ridiculously expensive, although it’s super useful. There are numerous Apple Pencil alternatives available in the market.

Most people end up buying the Apple pencil because they think the other products in the market are incompatible with their iPad or it doesn’t sketch well. That isn’t the truth. There are numerous Apple pencil like products that are compatible and are perfect for doodling as well.

There’s just one pencil that is a solid replacement to the Apple Pencil and that is the Logitech Crayon. It’s an official Apple Authorized stylus pencil that costs around $112 and is perfect for taking notes and doodling. It’s enabled with palm rejection technology that ensures that a palm can be placed on the tablet for taking notes. It’s compatible with 100+ apps.

The Wacom is a highly popular brand amongst creatives who are looking to draw & doodle. The Bamboo Sketch is by far the most popular alternative to the Apple Pencil.

If you are looking to draw very accurately on the iPad or an iPhone, then this is the best stylus out there, primarily because of Wacom’s experience in creating these type of products for designers and creatives.

It’s compatible with all iPad devices and iPhone devices over iPhone 6. It’s customizable buttons can be changed via Bluetooth and also the nibs can be changed based on your design preference.

It’s compatible with 10+ apps that includes Goodnotes, Sketchbook, Adobe Draw, Zoom Notes and more. The battery lasts for 15 hours on a single charge.

Logitech’s Crayon Pencil works with the iPad specifically, and works across most iPad devices that are over iOS 12.2 and above.

The first and foremost feature is that the Logitech Crayon has the ‘Palm Rejection’ technology which means you can place your palm while designing or drawing or writing and the pencil will still work. The smart tip understands angles and accordingly gives you a thicker or thinner line depending on how you position the pencil.

Over 100+ apps are compatible with the Logitech Crayon. It’s suited for school students who can mark up on Excel sheets, PDFs and text documents. It’s perfect for taking notes.

The lightning cable that charges the iPad, charges the Logitech Crayon as well. One of the best alternatives to the Apple pencil.

It’s also the only pencil that is approved by Apple as an alternative. The Logitech Crayon feels like writing with a real pen.

It doesn’t have pressure sensitivity, tilt support, shortcut buttons, palm rejection. This is just a stylus. Most people need a stylus for simple writing and taking notes and they end up buying something very expensive. If you want an Adonit Product that has the same functionalities as the Apple Pencil, then check out the Adonit Note+.

This is not an active device and if you are looking to take notes, you can use the Zoom function. It’s a very durable device and the tip doesn’t need replacements at all.

The Adonit is a cheap stylus alternative.

If you want a mix of both the worlds that is the affordable price of a stylus and the features of a Pencil, then the Moko Active Stylus Pen fits right in. It just costs $27 which is super cheap for a stylus pen.

What sold me on this Stylus pen is the Palm Rejection technology. With Palm Rejection I can draw and write without the need of gloves or having to lift my hand. It’s Bluetooth enabled and gives 20 hours of battery life with 100 minutes of use.

One downside is, it doesn’t work with the iPhone, and works with the latest iPad models. It can be charged through USB. It works with screens with a tempered glass or a screen film.

It has one of the highest 5-star ratings across other stylus devices. It’s perfect for drawing, taking notes, swiping and more.

The Xiron Touch Screen Stylus is a budget stylus that doesn’t have the palm rejection technology, but it comes with nifty gloves which acts as a physical palm rejection accessory. It has a 2 in 1 copper tip & mesh.

With 1.5mm of Ultra fine copper tip, it’s pretty accurate. There are no different thicknesses though. It’s meant to be used at an angle that is similar to a pen. It doesn’t work with Windows touch screens and the iPad Air 2.

It takes 60 minutes to fully recharge the stylus and it gives 8 hours of continuous use. It auto powers off when not in use to conserve battery life.

It has a beautiful design and looks very similar to the Apple pencil itself. At $21 it’s a budget alternative to the Apple Pencil.

The one from Goojodoq is a life saver as it costs only $22. It has all the features of the Apple pencil. It has the tilt technology that lets you shade in different thickness just by tilting the stylus.

It’s a Fake Apple Pencil because it mimics the look of the Apple pencil as well. In terms of the features, It has the palm rejection feature which is the most sought after in iPad pencils.

It charges through the type-C port and you have a working life of 20 hours. It takes 1 – 1.5 hours to charge completely.

It’s made of Aluminum alloy, which is pretty strong in case of falls. It has a touch sensor on the top of the Pencil. It has an indicator light that gives an idea of the charge left.

There’s an option to get a 1mm tip or a 6mm tip. It’s compatible with iPad Air, iPad Pro and the latest iPad.

It’s perfect for the new designer who is testing the waters with iPad drawing and perfect for note takers and for people who want multiple Pencils.

The Penoval is a mid-ranger costing about $35. It’s an active Stylus pen. In terms of compatibility, this device is second to none. It’s compatible with Android, iOS and numerous generations.

It requires no installation and has an interesting way of choosing thickness. The tip of the pen can be twisted to manage the thickness.

It comes with a carrying pouch, rechargeable battery and is charged through a USB charger. You get about 7 hours of continuous use, which is the biggest downside compared to the other options out there. It also takes 4 hours to fully recharge.

Tip diameter is 1.9mm. It’s perfect for everyday use, but isn’t good for drawing and art.

Another super cheap alternative to the Pencil is the Adonit Mark. It’s the cheapest Adonit available costing only $9. It’s a beautiful looking gadget with a mesh tip that is thick. It requires no battery or charging and works right out of the box.

It does not offer palm rejection technology which is a major downside, but one could purchase the hand gloves which are quite cheap as well.

It has a triangle design so that it doesn’t roll and fall down and break. This is not an Apple Pencil replacement in terms of features. This is a simple stylus that works brilliantly well.

A few people have asked me queries regarding the capabilities of a stylus when it comes to designing. Stylish that have a big mesh can be used for designing, but they won’t be designs with finer details. They are blot based designs.

What can I use instead of an Apple pencil?

Can I use any other pencil with an iPad?

You can use a third party pencil which is not the Apple Pencil. The only third party pencil that is approved by Apple is the Logitech Crayon. One can even use non-approved pencils such as Wacom, Adonit Pro, Moko Active Stylus to name a few. Even simple Styluses work with the iPad.

Where can I buy a cheap apple pencil?

You can buy a cheap Apple pencil on Aliexpress like the $22 Goojodoq that has the exact same features of the Apple Pencil. On Amazon, you can find the Moko Active Stylus which only costs $27 which is a perfect alternative to the Apple pencil.

Do I really need an apple pencil?

Most people don’t need the Apple pencil, they just need a stylus. An Apple pencil is a perfect fit for designers and artists who want to create intricate art on their iPads. For taking notes and basic scrolling and swiping, a $10 stylus is more than sufficient. Even styluses come with the ‘Palm Rejection’ technology.

Is the Apple pencil better than a stylus?

The Apple Pencil is definitely better than a stylus as it has multiple functions and is overall better for designing and doodling. It has pressure sensors, angle sensors which play a role in giving you a better experience. If the purpose is for simple note taking and scrolling and swiping, a stylus would beat the Apple pencil hands down purely on price.

Do knock off Apple Pencils work?

Can you use a fake Apple pencil?

One can use a fake Apple Pencil and many people prefer using an Apple pencil alternative or a fake apple pencil because it does the same job, works seamlessly with an iPad and does connect via Bluetooth with the iPad. There are no features missing and it can be used.

Is there a dupe for Apple pencil?

If you want to check if your Apple Pencil is genuine, then you need to enter the manufacturing ID on the Apple website and see if it’s a genuine piece or not. Also most Apple pencil fakes do not have the Apple Pencil logo. They are just a copy and are not a true replica.